Velum: The Use of Curtains in the Palace of Late Roman Emperors 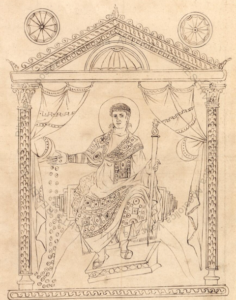 Curtains are a characteristic element of Byzantine court ceremonial. In particular, they serve to ‘reveal’ the sovereign during an audience ritual. The origin of the ceremonial use of curtains is generally traced back to the Roman Empire, where it would have developed from the first century onwards, acquiring a coherent form at the latest with Constantine. In this paper we will reconsider the evidence in order to clarify the mechanisms that led to transforming objects of common and secular use into powerful symbols, which were functional for a representation of power that played with a measured alternation between visibility and invisibility, access and concealment of the sovereign. It is also argued that this process developed later than generally believed.

Ignazio Tantillo (Rome, 1966) teaches Roman History and Latin epigraphy at the Università di Napoli L’Orientale. His research interests embrace various aspects of Mediterranean history in the Roman period, especially in late antiquity: imperial ideology and the representation of power; aspects of political and cultural history of the fourth century; late antique Africa; Cassiodorus and Ostrogothic Italy; the city of Leptis Magna and Tripolitania; the province of Crete and Gortyn; the ”statue habit” between II and VI century AD.

Preregister for limited places by sending an email to oen@isvroma.org (FFP2 mask and Green Pass required). If you want to follow the seminar via zoom please register here!