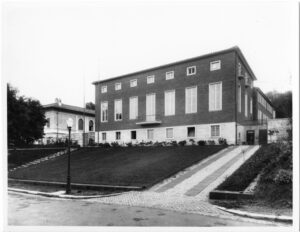 The Swedish Institute of Classical Studies in Rome was founded in 1925 on the initiative of Crown Prince Gustav Adolf, who became the first chairman of the board. The aim of the Institute’s foundation was to promote classical studies, but also more generally to foster research in the humanities and arts. Activities began in 1926, led by the first director, Axel Boëthius (1889-1969), in premises in via del Boschetto 68. The first course in classical archaeology was organised in the same year. In 1928, the Institute moved to a larger space in the Palazzo Brancaccio in Via Merulana, and in 1939 it was given new premises in via Omero, in Valle Giulia near Villa Borghese.
Between 1956 and 1978, archaeological excavations were carried out in the Viterbo area under the guidance of the Institute: San Giovenale (1956-65), Luni sul Mignone (1960-63), Selvasecca (1965-71) and Acquarossa (1966-78).
In 1959, an art history course was established, and in 1991 the position of lecturer in art history and deputy director of the institute was created.
Among the funds and foundations that support research, the Fondazione Famiglia Rausing is of particular note. 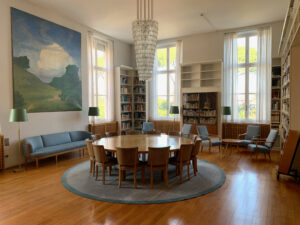 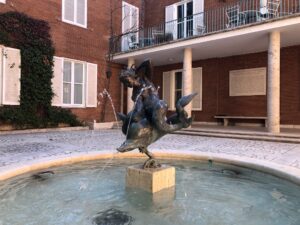 THE BUILDING
Architect: Ivar Tengbom
Construction manager: Oscar Sitte
Construction period: 1938-1940
Furnishings: Carl Malmsten (furniture), Elsa Gullberg and Märta Måås-Fjätterström (textile furnishings)
The building was built following an agreement between the Italian and Swedish states in 1937. The land was donated by the Italian state, which in return obtained land in Stockholm for the construction of a corresponding institute (Italian Cultural Institute). 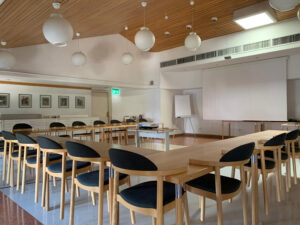 Both the construction of the original building and the guesthouse were financed by the Knut and Alice Wallenberg Foundation. The ambition of the project was to create a building in line with modern Swedish architecture and interior design.
Prince Eugen, who chaired the committee responsible for the choice of furnishings, painted and donated a copy of his famous painting “The Cloud” to the Institute, which is now in the Conference Room, while Olga Milles donated her husband Carl Milles’ sculpture “Solglitter” (Sun glitter) to decorate the Institute’s courtyard in 1956. The guesthouse was built in 1964 by the architect firm “Anders Tengbom”. In 1987-88, an auditorium was built during the renovation work designed by Bo Myrenberg, and finally, in 2008, a new book storage was added under the director’s residence.