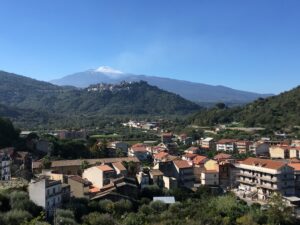 The Swedish-Sicilian Francavilla project began in 2016 and is organised as a collaboration between the Swedish Institute in Rome and the Parco Archeologico Naxos Taormina with the support of the Comune di Francavilla.

Francavilla di Sicilia is a small town situated in the valley of the Alcantara river, some 20 km from Taormina and Giardini-Naxos. The town is protected in the north by the Peloritani mountains, in the west by the Nebrodi mountains and in the south by Mount Etna. Francavilla was founded in the Norman period around AD 1100 and a medieval castello is perched high on a cliff overlooking the town. The Alcantara river with its mighty rock formations flows through the territory of Francavilla and is of particular interest to both geologists and tourists. Thanks to the river and the volcanic soil, the valley of the Alcantara is very fertile with cultivation of oranges, mandarins, lemons, nuts and wine. 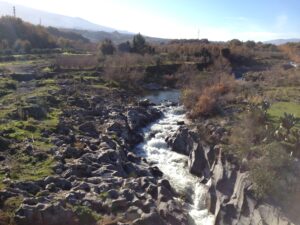 Underneath the mediaeval and modern town, ruins of an ancient settlement have been discovered. In 1979 a votive deposit and buildings of a late Archaic sanctuary to Demeter and Persephone were unearthed with rich finds of terracotta figurines and some remarkable terracotta tablets, so called pinakes. The pinakes, depicting scenes from the Greek myth of Demeter, Persephone and Hades, aroused particular scholarly attention as they are of a type coming from Locri (ancient Lokroi Epizephyrioi) on the Calabrian coast with no parallels previously found in Sicily.

Following the discovery of the sanctuary 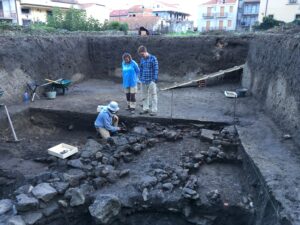 excavations took place in different parts of Francavilla from the 1980s until the beginning of the 21st century, mainly connected to constructions of new buildings or roadwork. In 2003–2004 more extensive excavations were undertaken by the Assessorato Regionale dei Beni Culturali, the regional antiquities authority. These excavations revealed a series of buildings, constructed with well-built walls made of the characteristic black volcanic stone. The buildings unearthed range in date from around 500 BC/early 5th century to the 3rd century BC. There is no later material than the 3rd century BC. Few prehistoric potsherds dating to the late Bronze Age and early Iron Age were found – not only in these buildings, but also in other smaller excavations in the town.

The plot of land offered in concession to the Swedish Institute in Rome for the purpose of excavations is immediately to the north of the 2003–2004 excavations, on a field owned by the Comune in what once was the garden of the 18th century noble palace Palazzo Cagnone, now used as the town’s library and museum.

The first field season in the autumn of 2016 was short and mainly aimed at controlling the results obtained by the geophysical survey from the ground-penetrating radar (GPR) done earlier that year by colleagues from the British School at Rome. With the help of that survey, a trench was opened in the southern part of the field where a metre and a half of topsoil had to be removed with a mechanical excavator before archaeological remains appeared. These consisted of an enigmatic surface of rough stones and small quantities of ancient pottery and terracotta roof tiles. In the autumn of 2017 more extensive excavations saw the opening of a larger area in which well-built stone walls, interpreted as foundations for houses, were encountered. Large quantities of roof tiles and Greek pottery dating to the Classical period were also found. A third season took place in the autumn of 2018 with a further enlargement of the excavated area to the north, again with a mechanical excavator followed by manual excavation. More well-built walls of buildings datable to the Classical period were unearthed along with much pottery, roof tiles, several loom weights and bronze coins. The majority of the diagnostic potsherds belong to vessels used for consumption of food and drink, such as skyphoi, kylikes, amphorae and cooking pots. Much of the pottery is likely to be locally produced, but among the black-glazed pottery Attic pottery was identified and there are amphorae from Corinth (both the Corinthian A and B types), South Italy and of the Ionian-Massaliote types.

The material evidence including the buildings, the sanctuary with its wealth of terracotta finds, fragments of architectural terracottas and the large amounts of Greek pottery suggest that this is in fact a Greek settlement. But what was this anonymous settlement’s relationship to Naxos? Is Francavilla primarily a sanctuary site used by the Naxians for the cult of Demeter and Persephone? Could this be the ancient town of Kallipolis, a town which has never been identified? Kallipolis is mentioned by Strabo (6.2.6.) as founded by Naxos, and Pseudo-Skymnos informs us that the foundation took place at the same time as Zankle, Leontinoi and Katane, which would indicate an early Archaic origin. According to Herodotus the town was destroyed by Hippokrates of Gela who in 495 BC failed at taking Naxos (Hdt. 7.154.2). According to Strabo, Kallipolis was abandoned at the time he wrote in the early first century AD. However, none of these ancient sources gives any indications of where Kallipolis was located, so one hypothesis is at Francavilla.

This project may not be able to answer this question, but all the evidence so far available from Francavilla point to this having been a Greek settlement near a sanctuary of some importance. Strategically placed in the Alcantara valley, the settlement at Francavilla constituted a link between the coast and the settlements further inland such as Randazzo and north to places like Abakainon, from where the road continued down to Tyndaris and the Tyrrhenian coast. It is hoped that continued excavations will help to further our understanding of northeastern Sicily and hopefully help to clarify this anonymous ancient settlement’s relationship to Naxos.

The Royal Swedish Academy of Letters, History and Antiquities in Stockholm and the Fondazione Famiglia Rausing of the Swedish Institute in Rome have graciously funded the project.