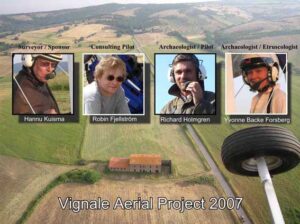 After more than fifty years of archaeological work at the Etruscan site of San Giovenale, the field research continued. In order to widen and fully understand the complexity of the ancient site, an investigation of the landscape in the immediate surrounding felt compulsory. In 2006, Vignale Archaeological Project therefore initiated a landscape-archaeological survey of the sparsely studied Vignale plateau – a site located next south of the now dominating acropolis and surrounded by ancient infrastructure. This focus was a natural preference since previous studies and excavations, which comprised an ancient bridge complex with adjacent buildings, lead us across to Vignale over the Pietrisco brook. The subject of the latter was also presented in a doctoral thesis by Yvonne Backe-Forsberg, Crossing the Bridge – An Interpretation of the Archaeological Remains in the Etruscan Bridge Complex at San Giovenale, Etruria. Trial excavations made on the Vignale plateau during the middle of the 20th century could for the first time verify the presence of early and late Etruscan building activities. The ancient remains found atop and in the vicinity of the plateau, to a degree added during the 2006 survey, however yielded for an even more effective survey method. In the spring of 2007 the project therefore incorporated a small airplane that could be maneuvered by the archaeological team’s pilots using assorted remote sensing techniques. 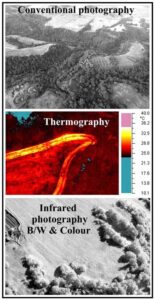 The ultralight plane used over Vignale and its surroundings, carried two surveyors besides camera equipment. The plane was obtained for archaeological purposes and generously sponsored by the team member MD Hannu Kuisma. All flying equipment was brought to Italy from Mora in Sweden by car using a trailer where the project initially used a small runway close to the city of Blera. Eventually, the two weeks daily survey operations used the airfield in Vejano, which is a three minutes flight from our site where all remote sensing activities were carried out from altitudes between 50 and 400 meters. The remote sensing apparatus involved thermography (IRT) besides conventional- and near infrared photography (NIR) using both colour and black and white imagery. All cameras using a digital interface. Additionally, a fourth remote sensing technique was used, more specifically a LiDAR-survey which was carried out by GEOCART s.r.l in September 2010. The study covered an area of around 6 sq. km by using a full-waveform scanner. The use of IRT- and LiDAR-equipment was made possible due to our cooperation and help from Dr. Rosa Lasaponara and Dr. Nicola Masini from Consiglio Nationale delle Recerche (CNR), University of Potenza.

Conventional photography was utilized for landscape aerial photographs in general but above all to detect variations in vegetation cover and soil types generated from underlying structures – that is, soil- shadow and crop marks. The NIR-camera was a conventional DSLR-camera modified to cover the NIR spectral channel which had a potential to further enhance vegetation marks. Thermography on the other hand, could detect underlying structures such as walls and water installations, this through variations in soil temperature. For example, a hidden well or a spring could produce an image where the wet and cold interior was depicted as a blue spot in relation to the surrounding warm-coloured structures. Where conditions were optimal, the same relationship between warm and cold could be detected among various features embedded in the soil. The aerial LiDAR was furthermore employed to perfect the visuals of Vignale’s topography. From a helicopter, this active remote sensing technique provided direct range measurements between a laser scanner and the structural landscape of Vignale, mapped into 3D point clouds.

The projects of 2007-2010 were made possible from the generous financial contributions from Föreningen Svenska Rominstitutets Vänner, Torsten & Ingrid Gihls fond and Fondazione Famiglia Rausing. Due to generous funding from Stiftelsen Enbom’s donations fund the manuscript of San Giovenale VI:2-3 (ActaRom4o 26:6:2-3) What’s hidden beyond the bridge?- Analysis and dating of the Vignale Plateau is now processed by the editor of the Editorial Committee of the Swedish Institutes at Athens and Rome (ECSI).